re did the link to the image let me know if that fixed it. if not i'l have to use another hosting site other then my google photos.

The Ingram has arrived!

No it is a big kit, it is just the peg he uses is 'ginormous'!

As to the scruffy building, may we all be able to build that scruffy! Looks great

Casey, yours is coming along nicely too.

I got the main landing gear done. I kept it pretty simple. I used lengths of sprue for the main arms. The suspension supports are from the spares...some sort of suspension pieces. The wheels are from my aircraft spares box. The idea was to use a smaller diameter wheel that was twice as wide...but I couldn't find both. Anyway, these will work. 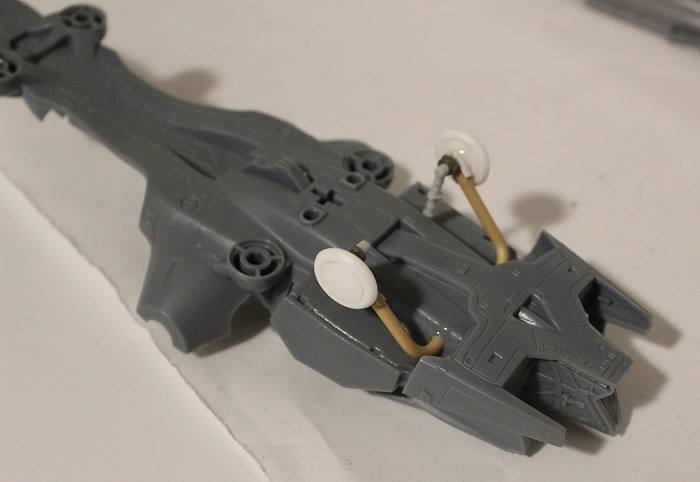 Sitting on them. This kit has some weight to it so the landing gear has to be strong. I like the stance.
I still have to do the rear landing assembly...I don't want it to tail-dragger.
I still have to do something with the original articulated arm/leg things. I might try to use them as weapons mounts or just cut them off. 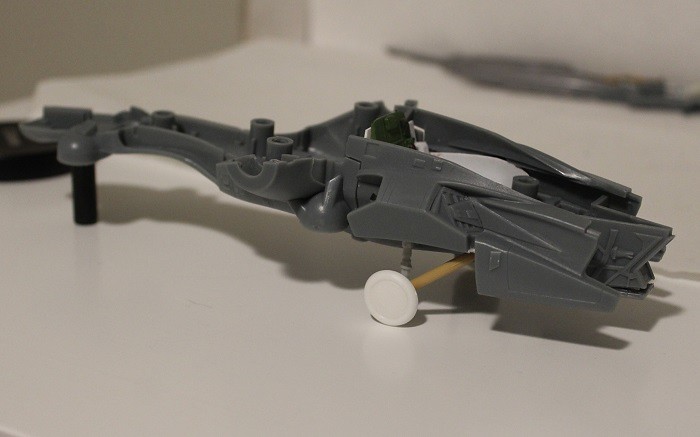 Speaking of weapons....I'm sort of working through that at the moment. The biggest obstacle is working around the pair of engines.
I'm planning on mounting two guns, using some old Tamiya 2cm flak guns from the spares. I have an old 1/48 Hasegawa bomb set there's a pair of towed target arrays. The tank loking parts might become gun pods. There's also a pair of test bomb (I think) that I might use as bomb pods. I'm got some 1/35 and 148 rocket pods as well as a few 1/72 missiles.
And then there's the kit's belly gun. Sitting on the landing gear, it won't fit. And the arm for it is fixed so I can't position it folded. I'm thinking about using the arm as the rear landing strut. The size is about right. If I am lucky I might be able to use the kit's mount for it. 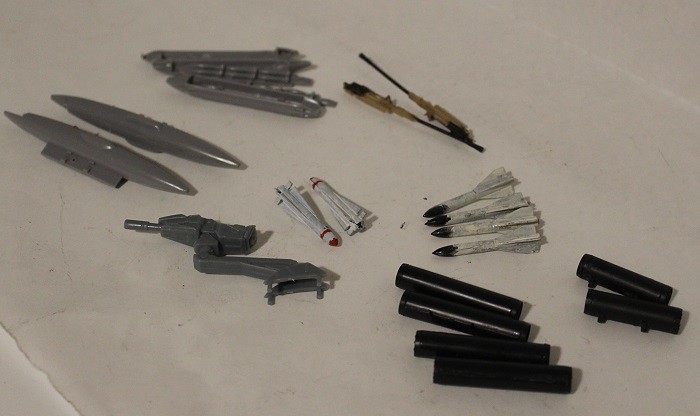 Anyway that's it for now. Once I sort the weapons out, I should be in the home-stretch.

Some great builds by all.

Maybe the front pair of the original mounts could be used as the base for pylons to hold the guns or missiles a la helicopter gunships? Maybe even an Over/Under mount system?

A little late to the party, but I'm in with a Warhammer 40k Vindicator. My Start shot is a little old and I've managed some assembly since. I'll try to post photos of that this weekend. 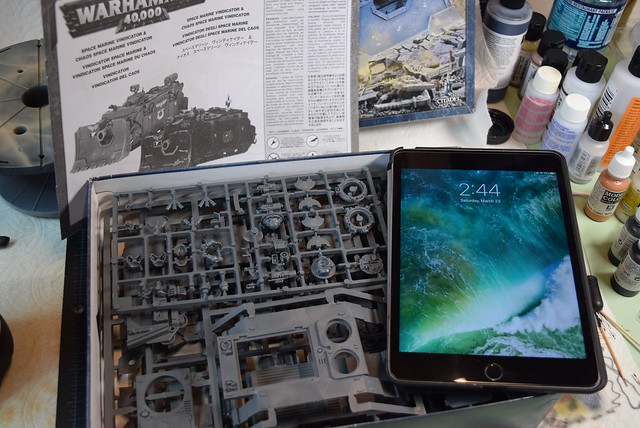 REPLY & QUOTE
SGTJKJ (Jesper) said
Welcome onboard, Zontar. Cool build - I have done some of those myself.

What colors/legion are you doing?

REPLY & QUOTE
Scipio2010 (Shawn) said
Ive made some progress on the JS-7. Finally getting all of the filling and sanding done.

This is a comparison shot next to an OOB JS-7 I built not too long ago.

to all,
still just slowly doing bits'n'pieces on my little project.
Finally made an attempt at the nose cone riblet pieces. I only did one side to ensure that it would work and hopefully look OK, seem's to be a reasonable likeness so onto the other side now. I'll do the final filing, sanding, shaping once both sides are glued up. The riblets are 1.5mm sheet rough cut to the nose cone contour with .5mm spacing between them. So finally that's one of the more complex areas more or less done

. The door scribing looks very rough in the photo but on the model it doesn't look too bad (we'll see once I throw some primer at it

).
This little project is proving to be slightly more complex than I had anticipated but is still a nice relatively easy and fun way for me to ease back into the modelling scene. 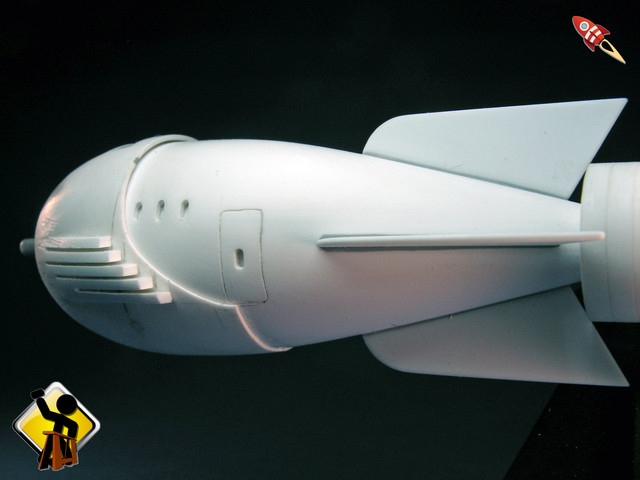 REPLY & QUOTE
Serial project starter :-)
I became insane with long intervals of horrible sanity.
Did you ever stop to think, and forget to start again ?

the build has been fun. As for colors, I know nothing about the Warhammer 40k universe, so I'll probably paint the Vindicator in an imaginary Konflict 46 German scheme.

Roger, fiddly they may be, but they will be a real standout in the end.

As for colors, I know nothing about the Warhammer 40k universe, so I'll probably paint the Vindicator in an imaginary Konflict 46 German scheme.

Zon, that sounds awesome. Looking orward to see more of that!

REPLY & QUOTE
Klaus-Adler (David Myres) said
ok well i'm calling this one done, so ladies and gentlemen i proudly present to you Bandai's AT-M6 from the film "The Last Jedi" 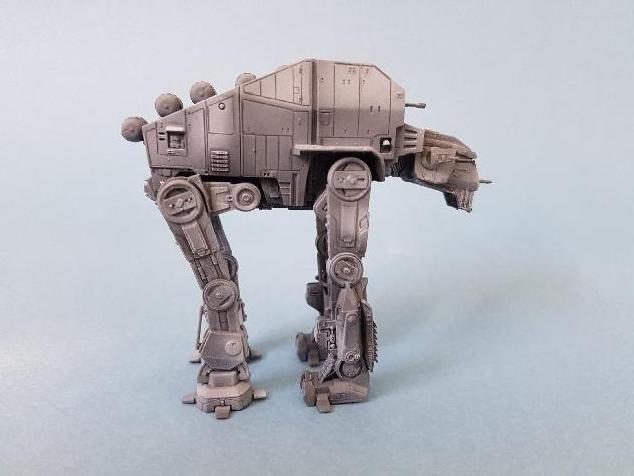 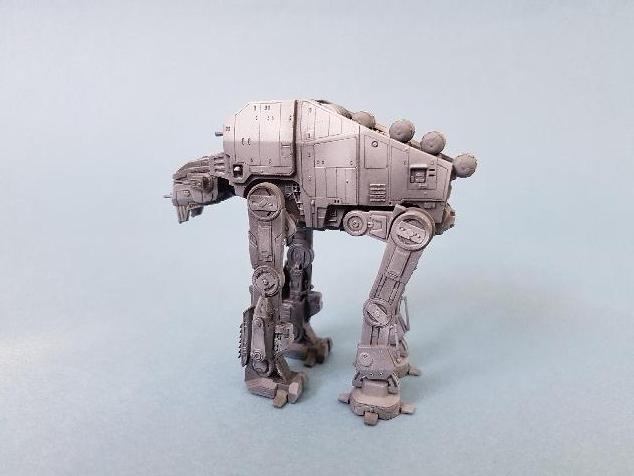 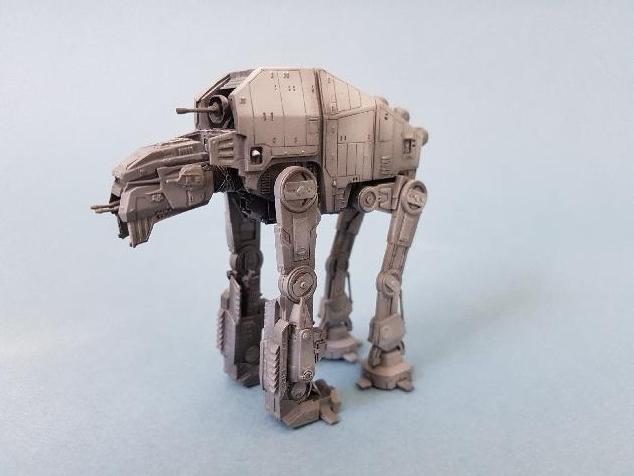 and this shot gives you an idea of just how big this kit is: 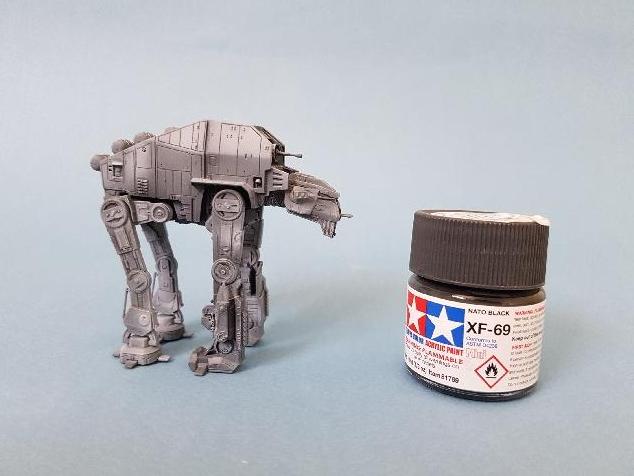 REPLY & QUOTE
Dixon66 (David Savard) said
Wow, you got a lot of color modulation on such a small build. Very nice work!

REPLY & QUOTE
Dixon66 (David Savard) said
To prove to myself that I can still build something that isn't Bandai (LOL), I started the Moebius Viper Mk1 the other day. Nothing much to report on so far though. Engine housings, vertical stabilizer, and landing gear glued up so far.

REPLY & QUOTE
SGTJKJ (Jesper) said
I am changing my build into this beast. I am probably going to convert it a bit to look like a 1/48 light tank instead of s 1/72 heavy tank. Hope I can pull it off. Construction has started since this picture was taken, so it is progressing well. 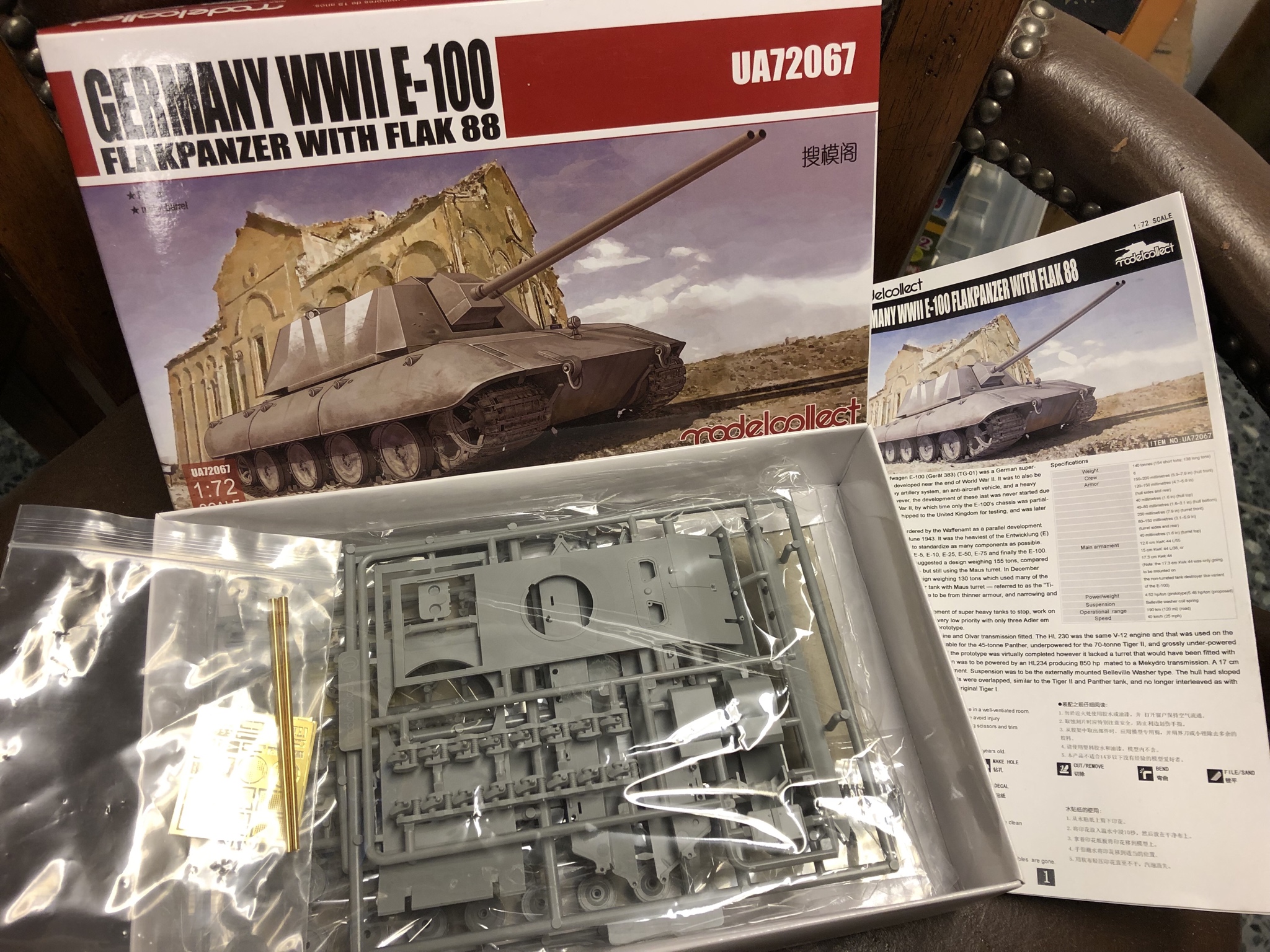 Been tied up with work but managed to take a picture tonight of in progress and had a start picture in the camera already. 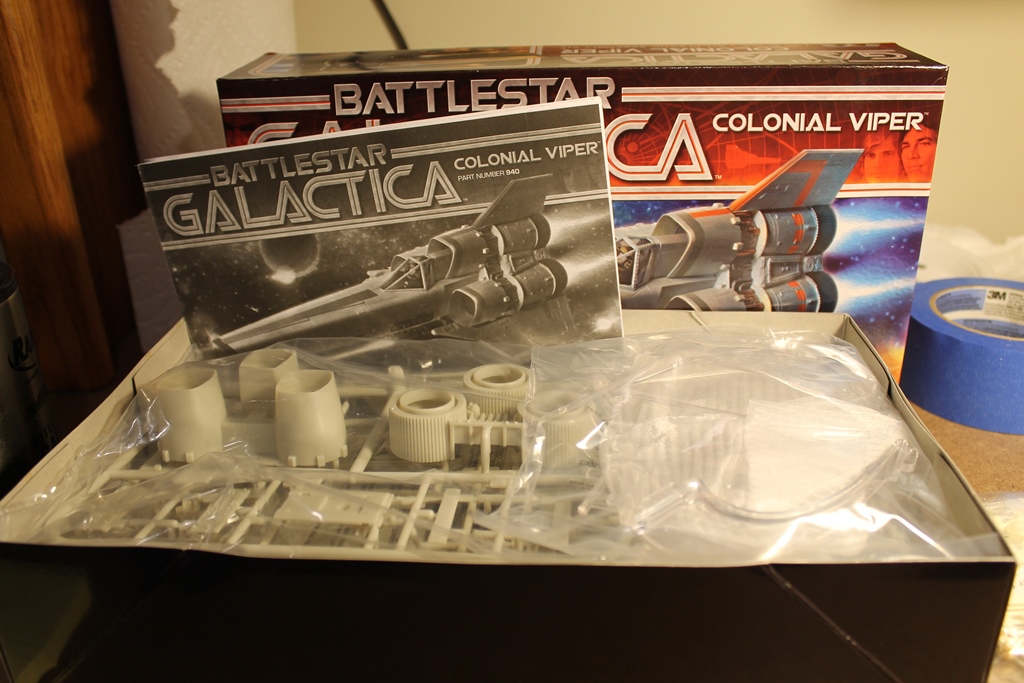 Also in the picture are an MMI Seated Male Viper pilot and one from a Revell TOS Viper I scrapped while in process a few years ago. Not sure which of the three (if any) will be going in. Blanked off the stand hole with .020 card, it is about the same thickness as the little squares underneath so it doesn't look to out of place. 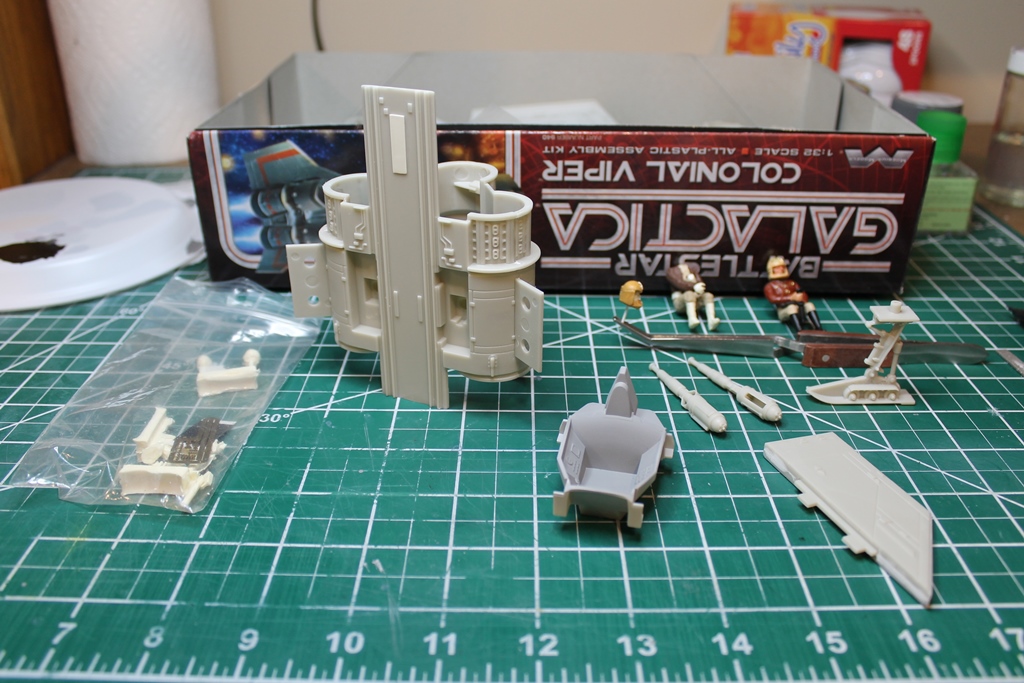 REPLY & QUOTE
Klaus-Adler (David Myres) said
many thanks for all those kind words and comments it's always nice to hear that people like your work and I am more than happy to answer any questions if anyone has any.

it was a fun little build and I have rebel blockade runner that I might use in another campaign I've signed up for.

I'm looking forward to seeing all of your builds in this campaign as I always enjoy watching other people progressing with their models and sharing hints and tips as they go.